via The Questions the People’s Vote Don’t Answer.

via The Magical Tale of a Tail

Since I am wrestling with a memoir that is built of such magical bricks ( no straw at all) and one of them has been the intermittent view halloo from Shelley Sackier I post this celebration. I have been searching for my critical friends who intervened at important moments and took their leave at equally momentous intervals.

She is right that serendipitous events must be merely sprinkled in fiction. Probably that should apply to memoir too, but when your life has been a fable from get go, and animals have appeared to nudge it along, there is no shirking or coyness possible.

Then came Milly. A collie more white than black and named for her namesake Milly Ndaba.

who made friends with Alfie and Alfie unwound a snake just at a critical moment when DNA had revealed its secrets.

But in the background was always Noel who kept me company without asking for anything.

How I do like a realist, even better a humerous realist who joins hands and says okay, got it, measure the distance…let’s jump!

Nice to meet you, sir. Thanks for coming to our writing circle. OK, everyone, let’s say what we’re working on for the next hour.

Sir, you don’t have to tell us the whole story. It’s enough to say “novel” or “memoir” or “blog post” and how many words or what goal you’re—

Fiction or nonfiction? Well, what’s your book about? There’s computers? And you’re creating a character like you… That’s fiction. No, it doesn’t matter if it’s set in the real world, as soon as you start making stuff up, it’s fiction. I mean, unless you’re writing memoir and being honest about fuzzy memories. But I’ve never seen a bookstore shelf labeled “Fiction but Also Nonfiction.”

Sure, I can give you a couple tips. Let’s just get everyone else started and—

Yes, planning a story is hard. You might find this website useful, it breaks down a traditional three-act structure…

!One I wrote earlier- before Stephen King asked me to.

Stories in Search of an Author? 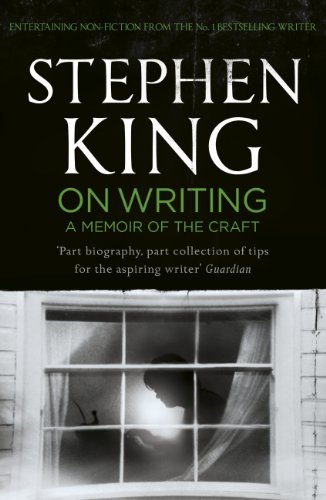 I  have come to believe that the stories we tell, exist before we confine them with words, harass them along paths, or have the arrogance to decide where they begin and end.

I have dreamt stories. I don’t mean derived stories from dreams, I mean written a complete story within the dream, at a desk in an examination setting with a two hour deadline, handed it to the ‘examiner’ and woken up. That story was set in Vermont.

That was inconsiderate since I have never been to Vermont, and when I showed it to those who had, one said ‘Soggy leaves do not lie on the autumn ground in Vermont, they get blown into corners against fences, in piles’. Another said that my hick-speaking character would live further south in Appalachia.

Still it was a good story, and one day I might redraft it. Or go to Vermont!

But my conviction in the pre-existence of stories found corroboration in reading Stephen King’s ‘On Writing’. I have avoided picking up this book because I am a curmudgeon by nature, and everyone had said ‘This is the only writing book you HAVE to read.’ So I didn’t.

But I now just have. Yes, it is as good as they all said.

Some years ago I thought I would try my hand at a genre story, crime, romance or some such just to prove I could. And because what I normally write has an uphill climb to find readers, too literary, too poetic, too philosophical, too difficult to Dewey. You name any difficulty and what I write will plead ‘guilty as charged.’

I would also write a short short story since my others run to 5K or more. I would stick to 2K. and do what I usually avoid, write in the present tense.

So I wrote a story called ‘Honey I’m Home’.

Now Stephen King sets one single practise ‘exercise’ in the course of his book. Here it is paraphrased and derived from the ‘Police Beat’ section of most local papers, most weeks,  Here is what he sets.

‘ A woman- call her Jane- marries a man who is bright, witty and pulsing with sexual magnetism. We’ll call the guy Dick, the world’s most Freudian name. Unfortunately Dick has his dark side, short tempered… control freak… Jane tries to overlook…make the marriage work…They have a child…when the little girl is three or so the jealous tirades begin again. Abuse is verbal and then physical…

At last poor Jane can’t take it anymore. She divorces the schmuck and gets custody of their daughter, Little Nell. Dick begins to stalk…Jane gets a restraining order…about as useful as a parasol in a hurricane…finally after an incident which you will write in vivid and scary detail…Richard is arrested and jailed/

After Dick’s incarceration…Jane takes herself home to a house…how she comes by this house the story will tell…Something pings at her as she lets herself in…makes her uneasy…decides to have a cup of tea and watches the news. Three men have escaped killing a guard in the process. Two were recaptured the third still at large…Jane knows beyond a shadow if doubt the one who escaped was Dick. That unease was the smell of Vitalis hair tonic. Only Dick would make sure he had hair tonic in jail.

It is a good story but not unique. I want you to change the sexes of the antagonist and protagonist before beginning to workout the situation in your story. Narrate without plotting and let this one inversion carry you along….” ( On Writing Stephen King)

So here is the one I prepared earlier. Names are unchanged. Every single one. I promise. Just a hasty draft to see if I could!

When you have read it tell me the probability of the synchronicity? Or consider whether the writer anywhere is simply a scribe?

The trainee nurse in the white cap and uniform sitting in the pallid spring sunshine pretends to read. The long fair pigtail down her back hangs like a bell-rope, there for the pulling. It had been twelve years, almost to the day.

‘I want to come to you’ he’d written’ somewhere anonymous, somewhere nice. Go feed the ducks in St James’s Park and I’ll walk to you. I want the pleasure of finding you.’

She sits feeling as conspicuous as an archery target, unable to predict from which direction the arrow might come, and unwilling to swivel or look anxious. She would wait for a hand on her shoulder before she would believe him. It comes, falling familiar despite the years.

“My love, you waited” The shell of her father, this thin new ascetic in a checked shirt walks around the bench and gathers her to his chest. Silently they stand, and weep, soundlessly, mingling in joy. They had waited together and apart since that day.

END_OF_DOCUMENT_TOKEN_TO_BE_REPLACED

HOLDING A MIRROR TO THE SUN

(In memory of William Kenneth Finton)

Is it the ghost of him I see

in the restless dreamscapes of a hollow night?

The ghost of him … or my own flawed impressions?

when he passed so suddenly

from our lives, so quickly there was barely time for tears.

A sudden shock … a stunning loss …

and life moved on without him.

With childhood’s end, the world could never be the same.

Twenty years … so long ago I barely recognize

that younger, wandering self.

Yet, in those silent dreamscapes of the night

he comes to visit still.

A near sighted old neighbor said

he saw him walking through the tall grasses

of the abandoned yard years after we left

“Bunk,” I said, not prone to thoughts of spirits,

yet encounters of a…

Other writers recognise it as a kernel from which green things will sprout.

This is one collaborator with Creation- labour intensive but at one with its glory.

GEORGE GUNN‘s The Great Edge is to be published by Grace Notes in November 2017. A Selected Poems is coming out from Kennedy and Boyd much the same time. Gunn also writes for Bella Caledonia.

IRENE CUNNINGHAM has had many poems published in magazines and journals across the years; now she’s preparing for old age, hoping for more time before the scythe lands. Writing is now heading up her priorities ladder; it usually wins the fight between lounging around or walking round Loch Lomond. Her new website is: http://ireneintheworld.wixsite.com/writer

MARK RYAN SMITH lives and works in Shetland.  He has published poems, stories and essays in various magazines, and a book about Shetland’s literary tradition.